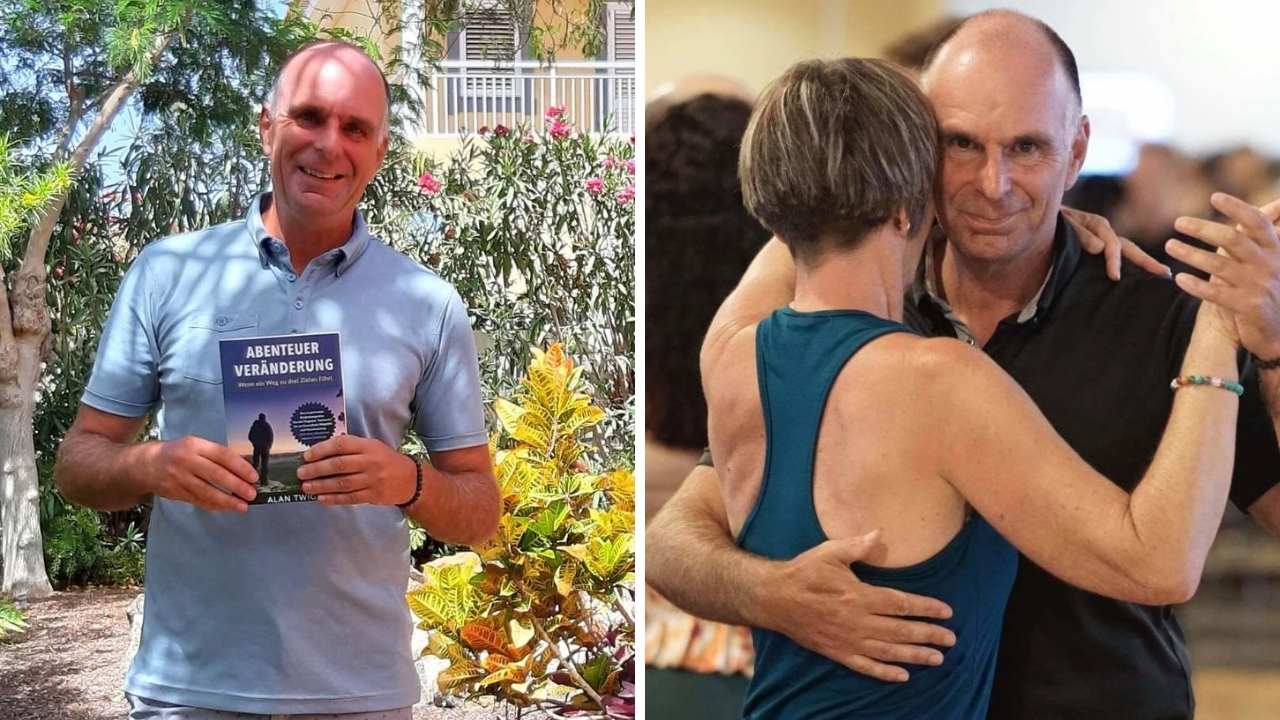 Why I Wrote the Book and Why I Made the Course.

In 2016 and I had just turned 50. I was a married father of four children, slightly overweight, unfit and balding.

Three years previously, my wife Susanne and I had decided to move from Germany where we lived to Tenerife in the Canary Islands with our two youngest children. Because we are self-employed, we were able to work from home, which, luckily for us meant that we had the freedom to uproot and move to Tenerife.

We’d settled into our new life and that was good. But I had reached another turning point in my life.

During the previous ten years I’d been working hard on growing my business and apart from the odd game of squash I’d been neglecting my health. I didn’t know why, but I felt bloated most of the time, as though air was trapped inside of my body that couldn’t escape. I also lacked energy and my digestion was causing me problems.

The only advice the doctor could give me was to try one of those bacteria dinks such as Actimel.

I’d just learned that diet and stress were probably to blame for my father’s heart disease. My grandfather had died from the same disease and heart bypass surgery had narrowly saved my father’s life only a few years earlier.

For me, it was time to do something to reduce my own risk of getting heart disease, or worse suffering a heart attack.

My daughter, Lea, was only 17 and had recently announced that she was going vegan. She’d explained a lot of things to me, but I’d largely ignored her. I’d told her that she was crazy and extreme, I’d asked her where she would get her protein and was worried that she would waste away.

I hoped that it was a fad and that it would pass.

But secretly I had huge admiration for what she had done. She’d put her principles before taste, convenience, culture and her friend’s and family’s opinion. That was more than I had ever done. To be honest, I secretly felt as though I might be losing her respect. I had always wanted to set a good example and to be a role model, but with this new development it felt a little bit as though it was the other way around.

Anyway, I’d learned from the government’s heart healthy website that needed to cut down on salt, sugar and saturated fat and get more exercise. My plan was to make sure that I was eating a balanced diet.

So I did some searching on the internet to find out which foods contained saturated fat. It was then that I discovered that it was in just about everything that I ate.  So I decided to add more fruit and veg to the food that I was eating and cut out processed meats.

But after a few weeks I was still bloated. If anything, I felt even worse than before. Whatever could be causing me to have all this air inside of me?

Maybe it was just because I was getting older and this was just a part of the aging process? The majority of my life I had always had plenty of energy, I used to wake up in the morning and be ready to go. I missed feeling like that. Now I felt lethargic and my attempts to make my diet more balanced were not working.

It was the first day of a holiday with all my family on the island of La Gomera off the coast of Tenerife. I was just settling down by the pool on the very first day when my daughter slapped down a book next to me and said, “Here dad, I know you care about health so a bought this for you”. The title read “How not to Die”.

The first chapter on the book was entitled “How not to die from Heart Disease”. Well It certainly captured my attention!

I started to read and became more and more excited. I discovered that a plant-based diet was the only diet to have ever been proven to not just to stop, but also to reverse heart disease. I remember setting the book down to one side and staring up at the cliffs with palm trees above. Hairs stood up on my arm and in an instant something changed inside of me. This was the secret to health that I had been searching for. My epiphany moment.

And if a plant-based diet could stop or even reverse heart disease, maybe it could help me feel better and restore my energy.

Just like my daughter I wanted to make the switch to a plant-based diet.

I decided right there and then to go vegan. My plan was to cut out all meat, fish, dairy and any products made with animal products. My daughter was with us on holiday so that evening at the hotel buffet she explained and showed me what I could eat. The holiday went reasonably smoothly, I found lots of things I could eat and I felt motivated.

When I got back home, my plan was to give away or throw away any products that I didn’t want to eat anymore and go to the supermarket and just buy foods that were vegan. My wife and I live on Tenerife and we enjoy eating out on occasion. So my plan was to simply find vegan restaurants and go to those instead.

But when I got home things weren’t working out as I had expected. I was very unprepared. I didn’t know what to buy and all the foods I picked up seemed to have either meat, cheese or milk in them. I began to feel hungry all the time so to compensate I began eating vegan junk food such as veggie burgers, crisps, French fries and beer.

I was also spending more money on food. Because I had no plan I went to the health food shops and paid a premium for all kinds of goods, but I was just picking things up randomly and giving them a go. I was rudderless and worse; I was becoming impatient.

People also began to criticise and question my decision to go plant-based. They asked me things such as where I would get my protein, telling me that it was normal, natural and necessary to eat meat and that I was just being too extreme for no good reason. That’s when I realized that I didn’t know anything about nutrition. I didn’t have any arguments or know what to say to people when they asked where I would get my protein or why I wanted to be vegan.

I tried to search online but was confronted with so many different opinions from so many so-called experts. I didn’t know what to believe anymore.

Only a month after having my ah-ah moment at the pool, I was ready to throw in the towel. After all, I was a 50-year-old guy who had always eaten meat and dairy. Maybe I should just go back to my old ways for the sake of an easy life?

But then I stumbled across a video by Gary Yourofsky on Youtube. And everything changed. Shamefully, up until this moment all my focus had been on myself, on my health and trying to avoid major health issues as got older. But this video by Gary entitled “The best speech you will ever hear” concentrated completely on being vegan for the animals. Because I had been trying to make the switch to a vegan diet, for the first time in my life I was open to watching and listening to someone advocating the rights of animals. And what I learned upset me deeply.

Now there was no question of turning back. Now I KNEW what was going on. Now I could no longer bury my head in the sand. Now going vegan was no longer a should, but a MUST.

From that moment on I decided to make myself an expert on going vegan. I wanted to know everything I could about nutrition, I wanted to know more about how animals are treated and what I could do to help stop the suffering and I wanted to know the environmental, spiritual, social and human benefits of making the switch.

It was then that I remembered all the difficult changes that I had already made in my life and how I had overcome them.  I recalled how I had moved to Germany, learnt a foreign language and started again from scratch in my 20s, how I had founded my first company and attracted new customers with no previous experience. I’d successfully made the journey from being a normal working-class guy from Sheffield to living in Tenerife. From leaving school with no qualifications to being a successful business owner, speaker of three languages, a father of four and someone who knew how to be self-disciplined. I knew a thing or two about habit change!

I became obsessed with discovering a simple and easy way to become totally plant-based.

Building on years of experience and drawing on centuries’ old habit-change principles, I took each and every aspect of going vegan and linked it to a principle for change. I wrote it all down and developed a watertight plan that would make it easy.

And boy did it work!

Within just 6 weeks I had changed my life forever. My food was more nutritious, tasty and interesting than ever before. Rather than feeling I was making a huge sacrifice, the opposite was true. I felt fulfilled, healthy and at peace with the world. I was making a contribution to climate change and my long-term health and I was no longer part of the abuse and torture of animals.

Then one day, I suddenly noticed that I wasn’t bloated anymore. I laughed outloud to myself, I’d been so fixated with finding the perfect method for going vegan that I’d not even noticed that my energy had returned and that the air in my body had disappeared.

Now four years later, I’ve never been happier, healthier or more at peace. I’ve lost a bit of weight without going hungry, my energy levels have never been higher and I always sleep like a baby.

I now know how to cook delicious dishes and the variety of food that I now eat is much more varied, tasty, fresh, healthy and nutritious than ever before.

I’ve become far more aware of what is going on the world. I’m far more open, compassionate, caring and tolerant than I was before. I’m now setting an example for myself and for everyone around me. I’m making a small but significant difference to the world every day.

I wish that I had made the change earlier in my life.

I will be eternally grateful to my daughter for showing me the light and helping me make the best change anyone could ever make.